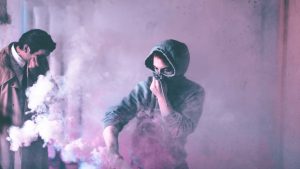 By the time I started researching ideas on how do I fix my toxic traits, I had already reached a state of sabotaging my happiness, relationships and health. It was truly awful to hit rock bottom. But, the only way forward was up. That gave me hope and motivation.

You can fix your toxic traits when you identify them, take ownership of your actions, do the opposite of what is toxic, get an outside opinion of how to better yourself and be consistent.

It sounds simple but not easy, I know!

Here’s the thing. If it were easy, everyone would be amazing. That just isn’t the case.

They say that you can’t help someone unless they want to help themselves. And I consider that to be true more often than not.

The fact that you are here trying to fix your toxic traits is a testament to your bravery and willingness to be a better person.

When you begin to focus on how to fix your toxic traits, the path becomes clear. You have something to work towards. By now, you’re probably aware of how these toxic traits have ruined your life.

But, let’s talk about how fixing your toxic traits can improve your life in amazing ways.

Clearly there is so much to be gained from ridding yourself of these toxic habits and traits.

So let’s start off with a pre-requisite that will keep you on the right path when the urge to fall back into old habits comes knocking on your door.

You must have a reason for doing this.

When you have an intrinsic (internal) reason to change, that desire will fuel you through difficult times.

Many times I’ve gone about this the wrong way and it always led back to finding a real reason for why I want to be better.

Your reason could be:

Whatever your internal driver is, find it and lock onto it like a hunter stalking its prey.

With that being said, let’s take a closer look at how do I fix my toxic traits.

When you begin to ask yourself how do I fix my toxic traits, it comes with the understanding that you have to be aware of what they are in the first place.

This requires some objectivity on your part.

How willing are you to analyze your behavior over time and isolate key events and problems in your life that were caused or contributed by your actions?

Because that is an unavoidable step in this process that will allow you to see any toxic traits clearly.

Pull up a page and make a list of the toxic traits you are aware of now.

I’ll be honest and admit that this wasn’t easy to do. But, it was the only way forward and I have no regrets.

I’m a much better person for it.

At the end of suffering is peace. All you have to do is just keep going.

2. Take Ownership Of Your Actions (Knowing Why You Do What You Do)

Even though this is number 2 on the list of ways to fix your toxic traits, it has just as much importance as anything else.

You could pinpoint all your toxic traits in the world but it won’t mean anything if your instant reaction is to find excuses and people to blame.

Irrespective of who did what, at the end of the day, you, I and everyone else are responsible for our own actions.

I could continue to blame my commitment issues on one of my ex’s or I could admit that it is a flaw that I have created and am responsible for fixing.

People can do whatever they like but how we choose to react is completely up to us.

That’s where maturity, self-control and will power come into play.

Without these attributes, it’s very easy to fall into a cycle of developing toxic traits that ruin your life for years to come.

For each item on your list of toxic traits, write down the action You took that created or worsened them.

Take ownership of yourself and you’ll avoid falling into traps.

3. Do The Opposite Of What You Would Ordinarily Do

If starving yourself to lose weight always results in a binge eating fiasco that undoes any progress, then it’s obvious that you shouldn’t starve yourself.

It doesn’t work for you.

Insanity is doing the same thing, again and again, expecting a different result.

If the answers aren’t correct, change them.

The moment you take ownership of your actions, you can pinpoint those that contribute the most to your toxic traits.

Figure out what would be the opposite of that. Try that approach even if you encounter some mental resistance.

It’s bound to happen but allow the results to push you forward when doubt and toxic thoughts try to pull you back into a bad space.

4. Get An Outside Opinion Of What You Should Do To Improve

Personally, I think therapy is useful and valuable in this day and age. But, it depends on the doctor.

If your therapist listens to you for 30 minutes and prescribes medication instead of actual therapy, there’s a problem. Find a therapist who is invested in listening and counseling you, even with prescription medication.

Sometimes, it’s difficult to understand where we go wrong in our daily lives.

An outside opinion or a third party account could prove to be valuable in identifying your toxic traits and figuring out how to be better.

Every so often, I speak to my significant other, family and friends about ways in which they think I could be better.

I urge them to be as critical and honest as possible.

And I take what they say into serious consideration. That doesn’t mean you have to do everything you are told to do.

But, you can consider the advice and adapt it in ways that are comfortable with you.

This may be number 5 on my list but it is the fundamental key to achieving results in life.

If you want to completely get rid of your toxic traits and become the best version of yourself, start and CONTINUE.

I believe in the cumulative effect. If you don’t know what that is, it’s an accumulation of small results that build up into a big result.

Often, the actions we take at first bring about an invisible result. And because we expect to see a change fast, this becomes demotivating to some people.

They wonder what’s the point of doing something different if they have nothing to show for it at first.

Whatever you set out to change about your behavior, do so with the intention of being consistent for an extended period of time.

If you can stay consistent for an entire month, you’ll stick with those changes for a long time because you’ll get some kind of result in that period of time.

What Are Some Of The Most Toxic Personality Traits?

To give you a better idea of what kind of traits and behavior are considered toxic, you can refer to this list that I’ve compiled for you.

These toxic traits are almost always attached to a life full of unnecessary drama, relational issues and dissatisfaction.

What Are Some Of The Signs Of A Toxic Personality?

Whether this is you or someone in your circle, I think it’s imperative that you familiarize yourself with the signs of a toxic personality because it can save you from a whirlwind of issues.

1. Someone who enjoys drama

As much as this might ruffle a few feathers, there’s merit in identifying someone who enjoys drama as problematic.

Here’s why – they will seek out a narrative that supports drama, even if it requires spinning tales in a way that is untrue.

When you give off a certain energy, it is usually sent back to you. That’s where the law of attraction comes into play.

If you’re someone or know someone who thrives on drama, chances are that their behavior is going to be in support of that.

This means possibly telling lies, spreading rumors, creating a rift between people, speaking other people’s secrets, so on and so forth.

Keeping friends – and good ones at that – requires certain personality traits that don’t usually exist in conjunction with toxic traits.

If you’re a person with predominantly good personality traits like compassion, kindness and compromise, you’ll attract similar people into your life.

Those traits are required for a healthy friendship to thrive.

But if you’re surrounded by toxic traits, then even if you attract friends into your life, they’re either going to be as toxic or good people who don’t stick around. Why? Because they know better than to be around someone who is bad for them.

No matter how long it takes, eventually, a person who doesn’t possess the same toxic personality traits will pull away.

Worse than that, perhaps a toxic person would get rid of his or her friends without much reason. So keep this in mind.

3. Someone at the center of gossip

Where there’s smoke, there must be fire.

And someone who is entertained and enthralled by gossip is going to feel the same way about drama and fallouts.

The whole point of relationships of any kind is to build trust. Gossiping goes against the very foundation of a relationship.

It cheats on trust.

4. Finding joy in others failure and hardship

No good comes from wanting someone else to fail and suffer. It doesn’t improve your life or circumstances at all.

It does nothing to you.

The only person suffering adversely is the one who is dealt a bad hand.

And yet, you will find people rejoicing in or wishing for someone else’s failure.

If that is you, that is no way to be. I understand that we may all experience this in some form or the other.

Jealousy may be an unavoidable experience in life.

But you can make the decision to redirect those thoughts into the trash and remind yourself that there’s nothing to be gained by being this way.

Since I specialize in relationships, here’s a list of all the toxic traits in a relationship you need to study and be thoroughly aware of. They are detrimental to a couple and will result in a lot of heartache if not addressed.

If there’s one common result in all these toxic traits in a relationship, it’s that they violate the agreement of trust.

It’s so vital to treat the people we care about with respect and compassion because they entrust us with their time, energy, care and attention.

Don’t ever take that for granted.

Take the initiative and work on yourself if you’re guilty of these toxic traits. You’re not too far gone! You can be a better person!

This site uses Akismet to reduce spam. Learn how your comment data is processed.

link to How To Stop Loving Someone Who Doesn't Love You

Unrequited love can be one of the most intoxicating and painful emotions to experience. Anyone who has ever been in this situation understands the great deal of yearning involved in living this way....

Navigating relationship and courtship problems aren’t necessarily easy. Sometimes, you may find that a guy isn’t putting as much effort into communicating with you despite him saying he likes...

About The Attraction Game

Hey, I'm Zak! The guy who runs this site. I wanted to create a safe space for people who are struggling with their love life to find valuable information that helps them to develop better relationships.

If you’re having a dating or relationship emergency and need advice or coaching, Click Here to my Services page for more information.